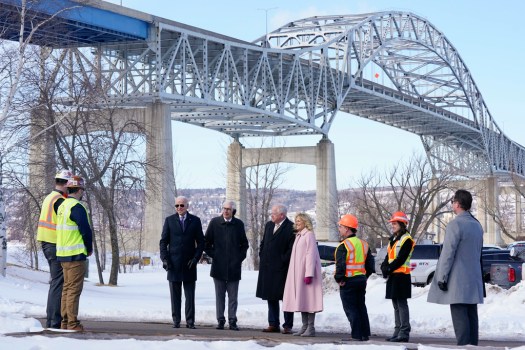 President Joe Biden, struggling to regain his political footing as the midterm elections approach, visited the crucial state of Wisconsin on Wednesday to promote one of his top accomplishments, a bipartisan infrastructure measure that will distribute billions of dollars to fix roads, bridges and other public works.

Biden’s trip was part of a customary post-State of the Union blitz that enlisted Vice President Kamala Harris and Cabinet officials, who fanned out across the country to showcase the administration’s plans.

Along with first lady Jill Biden, the president shook hands with workers in hard hats and neon vests near the base of the John A. Blatnik Memorial Bridge, which connects Wisconsin and Minnesota by spanning a corner of Lake Superior. The span is a perennial candidate for replacement because it’s too corroded to support heavy trucks, limiting its ability to serve as an economic lifeline for the region.

“After years of talking about infrastructure, we’re finally getting it done,” Biden said in a speech at a nearby college campus.

New Jersey pollster admits he ‘blew it’ on governor’s race, questions whether election polls should...

Emma Raducanu: US Open champion on resilience, celebrations and pleasing her parents

American politics’ fabulous gift to the Putins and the Xis