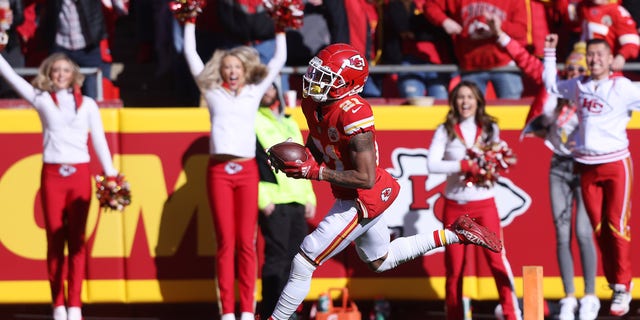 The Raiders initially gathered at the 25-yard-line after warmups but players and staff were seen jogging up to the Chiefs logo to break their huddle.

Chiefs fans reacted with loud boos from the stands as quarterback Derek Carr led the team back to the tunnel, but Kansas City wasted no time in responding.

Cornerback Mike Hughes scored on the game’s first offensive play after recovering the ball for a 23-yard fumble return for a score. Shortly after, quarterback Patrick Mahomes connected with Darrel Williams out of the backfield for a 23-yard catch-and-run that gave the Chiefs a 14-0 lead.

Clyde Edwards-Helaire ran in another touchdown just after the start of the second quarter, and a few minutes later, wide receiver Josh Gordon got the Chiefs’ fourth unanswered touchdown after a short pass from Mahomes on third-and-goal.