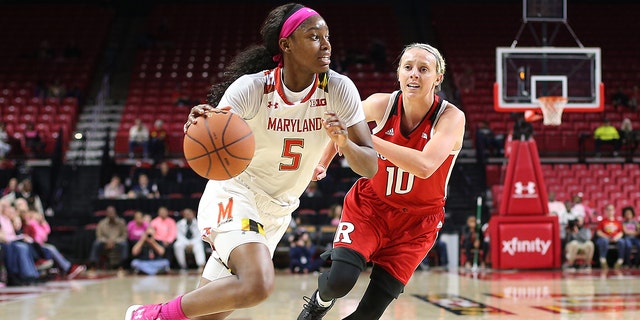 Kathleen Fitzpatrick played one season for the Scarlet Knights during her collegiate career but obviously never lost it.

By now you’ve seen it: a third-grade teacher pulls up from Steph Curry-range with her students’ hot chocolate on the line. Then, two quick dribbles, a couple steps forward, and…nothing bet net! Swiss Miss mustaches for all the rugrats.

Students at Washington D.C.’s Holy Trinity would be wise to bet on their teacher all winter long. As it turns out, that teacher, Kathleen Fitzpatrick, has been draining threes longer than her third graders have been tying their own shoes. She played collegiately at Rutgers after starting her career at St. Joseph’s.

“Ms. Fitz,” as she’s known to her students, started 16 games for Rutgers in her lone season with the Scarlet Knights. The 5’9″ guard’s best game came against Wisconsin when she drained three 3-pointers. That’s an impressive feat, considering it was a Big Ten game on the road. But it’s not like hot chocolate was on the line.

US Senator Calls On Israel, Palestinian Leaders To Discourage Violence In East Jerusalem

Katie Price says she wasn’t allowed to be with sister for birth but is so...