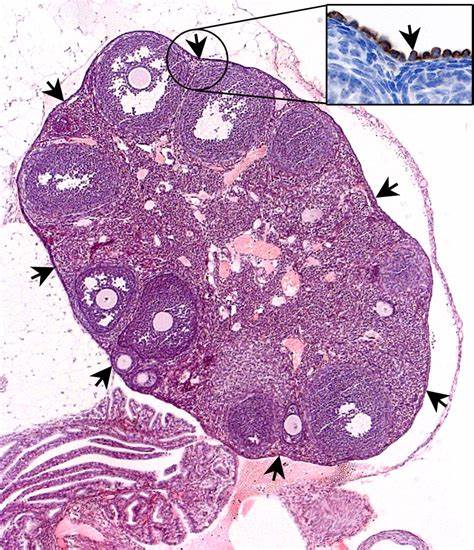 TMEFF1 is a newly discovered protein involved in the physiological functions of the central nervous system, embryonic development, and other biological processes.

Our previous study revealed that TMEFF1 acts as a tumor-promoting gene in ovarian cancer. AHNAK, as a giant scaffolding protein, plays a role in the formation of the blood-brain barrier, cell architecture and the regulation of cardiac calcium channels.

However, its role in ovarian cancer remains poorly researched. In this study, we detected the expression of AHNAK and TMEFF1 in 148 different ovarian cancer tissues, determined their relationship with pathological parameters and prognosis, clarified the interaction between the two proteins, and explored the related cancer-promoting mechanisms through immunohistochemistry, immunoprecipitation, immunofluorescence double staining, western blotting, and bioinformatics.

The high expression of ANHAK and TMEFF1 in ovarian cancer indicated a higher degree of tumor malignancy and a worse prognosis. Furthermore, the expression of TMEFF1 and AHNAK was significantly positively correlated.

The results also showed that AHNAK and TMEFF1 co-localized and interacted with each other in ovarian cancer tissues and cells.

Julianne Hough Responds to Backlash Surrounding ‘The Activist’: ‘I Am Not Qualified to Act as...

The 5 Biggest Business Moments of 2021