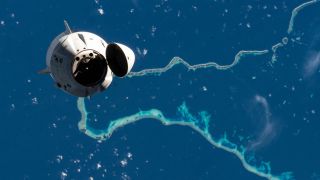 The contract covers missions Crew-7, Crew-8 and Crew-9, but NASA says it might order more crew launches in the future. SpaceX began flying NASA astronauts to the International Space Station in 2020, marking the end of a long drought in which NASA had no direct access to the orbiting laboratory after retiring its space shuttle fleet in 2011.
During this time, NASA astronauts flew aboard Russian Soyuz spacecraft while the agency worked with commercial partners to design new vehicles for the task.
In October, NASA released a request for new proposals to fly its astronauts on missions that would follow the 12 originally awarded to SpaceX and its counterpart, Boeing. The new contract marks the first flights arranged through that call.
Although the contract was already in the works, the announcement comes as tensions strain NASA’s relationship with its main partner in the International Space Station collaboration, Russia, after Russia’s invasion of Ukraine.
READMORE…
By clicking on Subscribe, I confirm that I have read and agree to the terms set forth in the Privacy Policy and Terms of Service including Early Journal’s ability to use and share my information and Early Journal, or third-party companies and business partners, may send me offers for products and services at the email address I have provided. I understand that my information may be supplemented with additional information obtained from other sources.