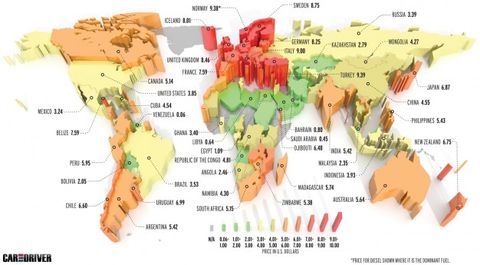 While gas prices are high in the United States, they are also high around the world.

According to Global Petrol Prices, while all countries have access to the same gas prices in the international market, taxes and subsidies vary by nation, leading to pricing differences.

MAP: Which states have the most expensive gas prices?

Typically, richer countries have higher prices while poorer countries and countries that export oil tend to have lower prices.

Like the U.S., other countries have seen a recent spike in gas prices.

As of March 7, Global Petrol Prices reports that the average price of gas around the world is $4.90 U.S. per gallon. The U.S. is on par with the average, with only one state, California, having gas prices higher than $5 per gallon.

However, while the worldwide average is just under $5, some drivers are paying upwards of almost $11 per gallon.

Top 10 most expensive countries to buy.

Some Democrats voting in GOP contests to block Trump picks

The embedded finance opportunity for marketplaces and gig-platforms